When Brian Willson speaks about the work that has come to define the free hours of his life over the last four years, the respect and reverence he feels for the men and women involved is written in the hushed tone of his voice and the wide-eyed, uncomprehending gaze of a man whose life has led him down a path he never expected to travel.

Willson’s trip into the unknown began in 2007 when a patient, a professional woodcarver, paid a visit to Willson’s dental clinic in Fayetteville. The man related to Willson that he ‘was in need of a new wood sander for a project he was working on making 300 walking sticks with compasses attached to the
handle for men and women involved in the Wounded Warriors Project (WWP),
a group that seeks to honor and empower members of the U.S Armed Forces
who have incurred service-related injuries on or after September 11, 2001.

The mission of WWP is to raise awareness about the needs of injured service
members, while helping them to aid and assist one another. The group also
provides unique programs and services to assist injured service members.

In addition to addressing physical injuries, WWP also features a Combat
Stress Recovery Program to help returning members deal with the
emotional and psychological stress in result of combat and the mental strain
of war.

According to the group’s website, with advancements in battlefield
medicine and body armor, an unprecedented percentage of service members
are surviving severe wounds or injuries. For every U.S. soldier killed in World
Wars I and II, there were 1.7 soldiers wounded. In Operation Iraqi Freedom
and Operation Enduring Freedom, for every U.S. soldier killed, seven are wounded.
Combined, there have been almost 42,000 injured in the two conflicts – nearly
32,000 injured in Operation Iraq and nearly 10,000 in Operation Enduring
Freedom.

Taking his cue from advice offered by his patient, Willson decided to
become active in WWP by offering service members involved in the program a
place to hunt on property he owns in Duplin County, a secluded stretch of 150
acres set in the rural farming community along Furney Jones Road southeast
of Mount Olive.

“I’ve always been into hunting, and my three sons hunt, so it just
seemed like a natural way for me to be able to help,” remembered Willson, during
a recent interview at the hunting site. 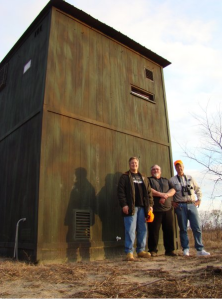 At the time , said Willson , he was in the process of building a hunting lodge on
his property. After making the commitment to become involved in WWP,
Willson said he decided to turn the building into a gathering place for the
service members.

“We put it up in about 10 weeks. We came in and made everything handicap
accessible and we put in central air, a fridge, a stove, and a microwave,”
said Willson.

The lodge, which is painted in camouflage colors, is also reinforced with walls
of solid concrete.

“It’s not going to go anywhere during a hurricane,” Willson observed.

Turning his attention to means by which he could make the hunting experienced
both easier and more enjoyable for WWP members, Willson decided to build a
series of hunting stands equipped with special features to help injured service
members navigate the two story structures.

“I guarantee you we have the only stand in Duplin County with
a 200 amp meter box,” he smiled.

The most unusual feature of the stands, which are built on concrete slabs and
take three to four months to build, is a chairlift which can be used to carry
disabled service members from the bottom up to the second story, where a
series of rectangular slots are cut out of the walls to provide spaces to shoot from.

The gun slots offer a clear view of the woods below and an ideal
vantage point for hunting deer. Wilson said the chairlifts were
provided by a company called Stairlifts, which is run by Charles Knapp, a former
Army physician who served during Operation Desert Storm. Willson
said Knapp sold him the chairs for half price and divided the payments into two
installments.

“It ‘s really rewarding’ to work with the guys, stated all uplifting.” Labann.
“There’s never anyone feeling sorry for himself; it’s all uplifting

According to Willson , the company is able to provide chairlifts to
Wounded Warrior members in their homes for no cost.

“Many of theses families are on a financial thread, so to get these chairs
at no cost is a big factor,” said Willson.

The stands also offer a few modern day amenities , such as a coffee
maker and a ceiling fan. Willson said he eventually plans to in stall bathroom
facilities on the ground floor as well.

A typical outing, said Wilson , begins with him picking up the ‘ WWP
Participants at 5 :00 a.m. and taking them to the lodge . After
returning from hunting, the service members are treated to a meal
of deer stew and vegetables . After the sun sets, Willson said everyone
typically gathers around a large camp fire to relax.

Willson said he has two to three hunts a year and normally takes out
four to six individuals at a time . The next hunt is planned for November.

Though only one stand is completed at present, it is actually the second
one built by Wilson and his team. The first one , several hundred yards
across the woods , was toppled by winds from Hurricane Irene .
“I was sick when I saw what had happened ,” said Willson. “There were
a lot of hours spent working on that stand .”

Looking over the remains of the first stand , Willson explained that the
entire project has been an exercise in trial and error.
“I’m not a construction guy: this has been a learning process for me . I just have to take it one
step at a time and learn as I go.

” Willson said he hopes to salvage the stairs and part of the walls of the original stand , and have a new one
completed within the next few months.

Joining Willson i’n the project was his longtime friend , Guenguys come out there’s no other Labann , who worked beside Willson on ) both the hunting lodge and tree stand projects.

“It’s really rewarding working with the guys,” stated Labann. “Out here in the country
people come out of the woodwork to help.”

As proof of Labann’s words , Willson ran through a list of neighbors , businessmen
and friends who have come to his aid since the beginning of the ambitious project.

Dan Penny, a farmer from Beulaville , has provided Willson with corn
which he uses to attract deer and prepare meals for the WWP members ,
selling it to him at cost while charging nothing for shipping or labor.

“If he was helping them, I felt like I could help him out,” said Penny about his
in involvement. “I think it ‘s a great thing ; there ‘ s a lot of people who don’t have
the finances to do what he’s doing. We should do something for them (veterans)
,because they’ve done a lot for us .”

Willson ‘s neighbor, Dean Cooper, a Vietnam Veteran who served in the war
from 1967-1968, was generous enough to deed an easement to Willson in
order to facilitate access to the property where the stands would be placed.

Cooper, who suffers from prostate cancer due to his exposure to the defoliant
Agent Orange while serving in Vietnam, said it was his hope that the experience
of the WWP veterans would be far different than his own .

“It ‘s a very good thing Brian ‘s doing. When 1 came back from Vietnam , we had
people spitting at us and call ing us ‘ baby killer.’ J ‘ think it ‘s different with the
people coming back from Iraq and Afghanistan ; there seems to · be a little more
sympathy.”

Though the public’s reactions may have altered ,Cooper said some things are
all too familiar. “When these guys come back injured, the government
puts them out. The benefits they’re getting aren ‘ t as good as a lot of
people think,” he stated .

According to Willson, two other Furney Road neighbors , Ray Bell and
Mike Chambers have also played roles in the project:Bell by allowing him
to cut through his properly while constructing the stands and Chambers by
agreeing not to spray manure at his hog farm during the weekends that Willson
host WWP members.

Another friend singled out by Willson was Jimmy Rich of Airco-Reco Heating
and Cooling in Kenensville. According to Willson, Rich did all the electrical
work on the stands, charging Willson solely for the cost of the materials. When
he sent Rich a check for $200, remembered Willson, Rich sent it back a
month later

“Those guys have been terrific,” said Willson. “They didn’t have to do any of
this: I’m an outsider and alot of times people in small communities are
very protective and distrustful of anyone not from the area. But everyone’s
truly gone out of their way to help.”

Speaking about the men who have come to his lodge in wheelchairs and
crutches, sharing their stories around the kitchen table in their hunting
lodge, Willson and Labann both shook their heads as they described
the mental and physical strength of the soldiers they’ve come to call
friends.

“These guys sit around the table, and it’s almost like they’re telling camp
fire stories.” said Willson. “One guy has a broken back, another one’s on
crutches, some have post traumatic stress syndrome – most of these
guys are pretty baldy injured, they tell us their stories, sitting around
the table. They are begining a whole new chapter in their lives,
transitioning out of military life. It’s a whole new world for them.”

“It’s really heartwarming: when these guys come out there’s no sob stories.”
stressed Labann. “There’s never anyone feeling sorry for himself; it’s all
uplifting.:

“Being in Fayetteville, a lot of my patients are in the military. I see a lot of
wives with husbands in the service. And sometimes the husbands are gone
or injured and they’re left alone with three or four kids. They go through
alot.”

Just getting permission to go on the hunt can be an ordeal, said Willson.
“They need three different clearances to come: physical, Phychological,
and legal. There’s alot of paper work involved. The medical is the main
one: if they can be transported and can fire a gun, then there’s no problem
with them hunting with us.”

As to the resolve of many WWP service members, Willson noted, “Every-
one’s a unique story. All these guys are tough as nails. We recently met
a guy who told us he has to make a decision about whether to keep his
arm, which is severely damaged, or have it cut off and be fitted with a
prosthetic.

“Everyone has their own everyday worries, but the things these guys
go through are something else entirely. It really puts this in perspective.”